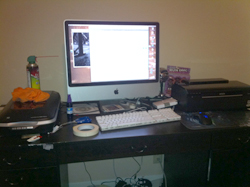 Before starting, here are the links to the previous posts in this series:

So we left off last time with my deciding to get implement a hybrid workflow. Today I’m going to talk about what equipment I ended up with, and why.

I knew that I had a reasonably tight budget to do this on, so like most things in my life, I needed to get a lot of bang for the buck. Let’s start at the digital capture point of the process, the scanner. 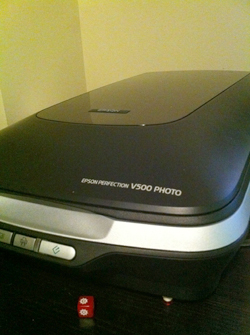 This was actually a pretty easy decision to make. My brother-in-law has an Epson V700 scanner, which was way out of my budget. So I decided to get a cheaper model, the V500. The biggest functional difference is that the V700 can scan up to 8×10 negatives, whereas the biggest mine will do is 120. Since I don’t shoot 8×10 negatives, this isn’t a huge deal for me. I do have a 4×5 camera that I haven’t used yet, but if I did I could always use Mark’s (my brother-in-law) to scan it. I found it pretty cheap on Amazon, ordered it and started scanning like a motherfucker. Done and done.

The printer, on the other hand, was a fucking headache to decide on. There are so many printers and ink sets out there that it’s ridiculous, and just starting to look for one was overwhelming. In order to jump start my search, I came up with the following list of criteria that I was looking for in a printer:

I did a lot of research before settling on the printer I bought. After unsuccessfully trying to solicit opinions from people, I eventually just settled into bombarding Google with search terms related to fine art inkjet printing. During the course of my quest, I stumbled across something that completely changed the trajectory of my search:

I had no idea that there were ink sets out there specifically created to make fine art black and white prints, which was basically what I wanted to do. Once I learned that there indeed were, my search pivoted from a printer to an ink set, with the understanding that upon finding the right ink for my purposes, the printer dilemma would resolve itself.

There were two main contenders in the B&W inkjet field: Piezography and MIS Ultratone, both made for Epson model printers. While they both looked and sounded awesome and both had numerous proponents, they had to meet my new criteria:

You see, in the wild world of fine art inkjet printing, most of the custom inks out there require the use of third-party curves and ICC profiles. I’ve already mentioned that I’m not very interested in the nitty-gritty technical aspects of anything under the sun, so I knew pretty early on that I didn’t want to mess around with that stuff. At least at first.

The Piezography ink generally had to be used with more expensive printers, and it looked like a fairly large upfront investment. Which isn’t to say that the ongoing costs are exorbitant, or that it isn’t worth the price, but when factored in with the fact that everything had to have custom settings to use (which require a $50 shareware program on top of everything else), I decided that — at this moment in time, at least — it wasn’t for me.

On the other side of the fence was MIS Ultratone inks. Their supported printer list ran the gamut from cheapo printers to fancy-pants expensive ones, and they also have a few different kinds of inks that have different levels of complexity.

At the bottom of their list of inks is the Easy Ultratone system. These inks are designed for lower-model Epsons, and have a black cartridge and then three identical grey cartridges for the CMY positions. They print off of the standard Epson driver without the use of curves, and the developer, Paul Roark, has a number of presets available for different types of paper.

After reading some positive reviews and user experiences for the Easy Ultratone ink set, I found a printer that they supported (a $70 Epson Workforce 30) at Tiger Direct (their main warehouse is local) and placed an order for the inks. I decided on getting the carbon ink for two reasons:

Once I ordered the inks, I ordered 20 sheet pack of Hahnemuhle 305 GSM Photo Rag paper from B&H and all I had left to do was wait.